A very clever and funny book. Imaginative and in many ways innovative.Not just a list of funny sayings, etc. (L G Rayner)

Rex Last has shared a wealth of faux pas and verbal blunders he has collected over the years from newspapers and from overheard conversations. Together with his witty style of writing he has created a hugely enjoyable read, and prompted many a 'laugh out loud'. I eagerly await more from him.
(Margaret Holman)

Extract from the Introduction
This collection of unconsidered trifles came about when I was a Lecturer in German at Hull University many years ago.
Apart from being famous for having its own local telephone service with green and cream phone boxes and an evil-smelling glue factory which made its presence felt when the wind blew from the wrong direction, Kingston-upon-Hull boasts a daily paper with the confusing name The Daily Mail, because it is actually the evening paper for the locality.
It has no connection to the London morning paper of the same name. I was inspired, if that's the right word, to start the collection by a small item printed in December, 1975.
In those days, the Hull to York road was a well-known single-track highway with a large number of accident black spots, and my eye caught the report of a fatal crash in which firemen had to cut the body free. The item ended with these jaw-dropping words from the original tattered cutting: 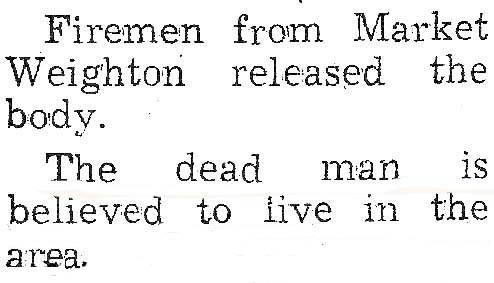 Little gems like that tend to cause a fleeting smile then vanish without trace, but I decided to try and preserve some of them for posterity without any clear idea of what I might do with them.
To this end, I began collecting press cuttings and other material which disappeared into a cardboard box many years ago and which I have only recently unearthed. Fast forward to the new technological era of the eBook, and that offered me the opportunity to bring these fading yellowing flowers out into the harsh light of day.

Extract from the "Typos" chapter
Recently, a Sky News reporter informed us that the Duke of Cambridge was embarking on a new career 'as an air ambulance pirate' (hopefully without a patch over one eye). The Duke himself compounded the felony in an interview in which he said that 'this job will keep me grounded'. (Really?)
Until I lost it some years ago, I long cherished a photograph I took of a country scene in the Lake District, with the following prominent notice: 'Public conveniences - over the bridge.'
Another daily paper claimed paternity for an impending royal birth with the splendid headline and byline:

Or perhaps that should be Royal Co-respondent? - and when President Reagan was shot, a foreign English language newspaper reported that he was 'under the surgeon's wife'. Which reminds me of the reporter who allegedly asked Abraham Lincoln's widow, 'Apart from that, Mrs Lincoln, what did you think of the play?' To end this brief chapter, the following bizarre item from the 1960s is entirely genuine and it was quoted in the original Spanish. I believe it appeared in the The Guardian. Here is an English translation:

To compensate for a deficit in its finances, the Society for the Protection of Animals of Barcelona has organised a bullfight.

To go to this book's Amazon page, where you can preview the text for free, or order and download a copy, go to www.amazon.co.uk and search for She smokes like a fish.